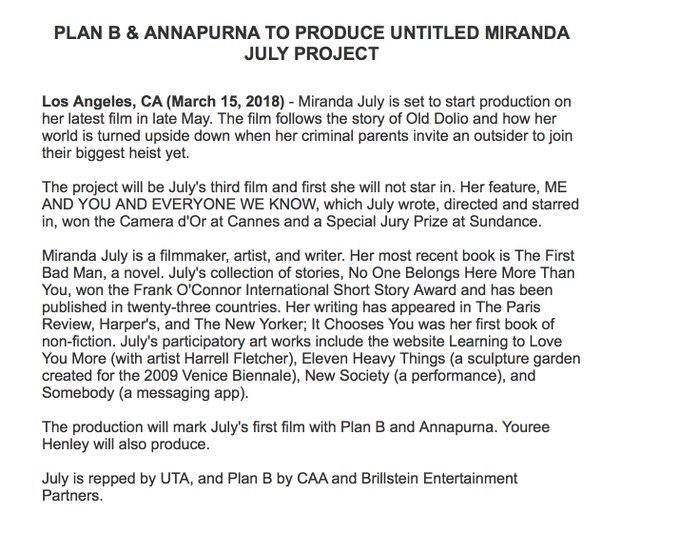 Love how far from July's usual predilections this sounds-- maybe deceivingly so!
Top

Re: Trailers for Upcoming Films

Re: Trailers for Upcoming Films

Finally! Looks great. It might drive some crazy but I like how Wood is using one of July's signature deep voices as innate to her character.
Top

I haven't felt this ambivalent about a film in a long time, but I'm slowly realizing that on a self-reflexive level my current puzzlement is in harmony with July's labile mood shifts along the paradoxical spectrum of blind confusion, conscious anxiety, and inebriated serenity. July again explores the state of the lonely and isolated being reborn through seeing new shades of life, though this experiment seems to reflect the tangled swelling spawned from a thought about the ramifications of parenting. July has spoken about her parents’ very loose eccentric style, and as a new mother herself (well, new since her last feature) it’s curious to think about the root of this film’s idea being a question posed from July to herself about the blurry lines between liberating parental approaches and restricting ones, and how the effects may not pan out as intended.

This family rejects capitalism theoretically, while spending their entire lives manipulating systems to accrue money, devoting more time to capitalist gains than most spirited capitalists. They fear people and the outside world and maintain a distance through infiltrating their spaces to retrieve superficial gains. The contradictions that normally populate July’s characters’ internal drives extend to seemingly superficial sociopolitical ideas that aren’t as acute as the intimate emotional-spiritual cores of her last two films -at least at first appearance- but carry a quiet depth to suggest that ingrained conditioning may be perceived as the ultimate existential bargain. The games about time as a fluid entity that can pause and linger in her first two films, here is recontextualized as an invaluable commodity that can be taken, or robbed, or wasted, and the resentment and pathos from this loss is the highest of stakes. A woman’s vacation with this group is a fun adventurous escape while the mirror image in Wood is an imprisonment from the opportunities that come with the chance to choose ‘normalcy.’

Is July wondering about how to parent her own child? If that child will benefit from a unique upbringing, or will grow to resent an indirect blockade from the freedom that comes from ordinary embraces of dominant cultures and ideological signpoints? Is she musing on whether an ‘open’ or permissive parenting approach was a fluke for her success or has inherent beneficial value? Where do the benefits from choosing one’s identity end and the thwarted belongingness from that self-isolation begin? Does she consider that this has contributed to her own loneliness just as it has to her self-actualization? Where do the parents' responsibilities lie, and where is the hope for the child to take on that control to truly take responsibility for their own happiness?

Unfortunately the film isn’t as consistent as July’s first two features, promoting a narrative skeleton without enough poignant meat for a brief stretch, and a few subsequent pockets of dead air. The unevenness may disappoint even her biggest fans (a club of which I'd like to claim membership), but Evan Rachel Wood gives one of the best performances in recent memory, and if there was justice she’d be nominated for an Oscar. Of course she won't be, not even in a year this barren, because her performance and character are so bizarre- even for a Miranda July piece- though our barriers to access her represent an equal reactive energy of her barriers to accessing us.

Still, July does disrupt the mold of surface-level quirky dysfunctional family dynamics from time to time in the first act, slowly loosening up what appears to be a deceptively mainstream (for her) display of actions bordering on satire, emitting a magnetism that spotlights the power of connection and the sadness of being an outcast. The way the mother says she had a hard day when role-playing in a particular scene indicates a break in character that speaks true to her experience of struggling alone in a cold, scary world. The comfort of basking in the banal routines of commonfolk for an instant lights up Wood’s eyes, and July finds a piercing magic in the feelings from being a ‘part of,’ a relief from needing to locate and fight against the world for a distinctive identity that isn’t formed in a dynamic relationship with one’s milieu.

The method by which July pulls off such a celebration of ‘togetherness’ in all of its forms, and contemplates how this can be achieved within conventional norms while also looking for the idiosyncratic shades hidden there, is actually completely in step with her thematic interests even if the film pretends to depart from her worldview for a little while. What we realize is that the film’s puzzling weakest section of irregularly orthadox construction takes effort for July, and is a stripped pitch by design. The digression is therapeutic and integral to July’s process, which is perfectly conveyed by implementing her own performance art into a more clichéd structure, discovering the ambiguity and uncertainty in a ‘right’ path, and the enigmatic yet overwhelming and permanent emotional consequences that result from any choice. Yet there is hope to emerge from the depths of neglectful traumas, and one particular scene demonstrates a life-affirming awakening wholly within familiar contexts of everyday habits for most of us, that would never get our neurons firing enthusiastically. The significance of a caring gesture is worth all the money in the world, and is what makes one a kajillionaire - even if that real interpersonal intimacy is often as fleeting and tragic as it is authentically meaningful and a reason many of us keep going. Though July knows sometimes we need to be stripped of everything to see the possibilities all around us, and unlock the power of resilience in resources we didn't have the skills to access before.
Top

From July's seemingly one-question interview on rottentomatoes: (I suppose her answer is sort of a broad spoiler)

Interviewer: The world of Kajillionaire is so distinctive. How did you come up with the idea of a family of misfit outsiders who live in a place devoid of touch and emotional connection?

Miranda July: Well, this is the first movie I’ve made as both a mother and a daughter. I think I was thinking a lot about birth and rebirth and parenting and reparenting. It’s a very heightened world, but I think I was hoping to describe how families are kind of cult-like and how the children have to ultimately betray the cult of the family, rebel against it, and in a way how heartbreaking that is. It’s extra painful for Old Dolio [Evan Rachel Wood’s character] because it’s all she knows, nothing else. That’s where I was coming from.

Wasn't a fan of this. The four lead performances are fantastic, there are a few good gags (sneaking past the landlord never ceased to make me laugh) but otherwise there aren't enough ideas here to sustain a feature film and this often drags. July's brand of "zany" is starting to feel stale, though Evan Rachel Wood is fantastic, combining deadpan physical comedy with real heartbreak.
Top

I didn't love this but I still have warm feelings about it, and it strikes me as the kind of thing that could really sneak up on you with a revisit. It's coming from a place of maturity that makes it feel less adventurous or sprawling than her previous films, but each bite still has that distinct July aftertaste. I hadn't rushed to see this obviously, but would recommend putting it in the upper half of your viewing queue to anyone on the fence.

As a side note, I don't know how TWBB whips out these collegiate-level analyses on the daily but that was a pretty good reading I thought
Top
Post Reply
11 posts • Page 1 of 1