Another one that's under the tcm banner on HBO Max currently.
Top

Fingers crossed that Adam's Rib is coming, if they're putting out a bunch of the Hepburn/Tracy films.
Top

ianthemovie wrote: ↑
Wed Jun 17, 2020 11:00 am
Fingers crossed that Adam's Rib is coming, if they're putting out a bunch of the Hepburn/Tracy films.

I wonder if the strings being visible in the courtroom scene will hold things up a bit. Pun intended I guess.
Top

Some more reissues in August:

I don't know much about the market, but I would assume part of the sales for these niche titles would be due to their hard-to-find aspect, specially in superior quality. Won't making these titles available on a streaming platform hurt their sales?
Top

These are the pre-1960 movies being added to HBO Max in July:

The Green Pastures
The Bishop's Wife (OOP, it looks like, though)
A Guy Named Joe
The Horn Blows at Midnight
Mildred Pierce
Now, Voyager
Pride and Prejudice
Angels in the Outfield

I italicized what's been released/announced, It will be interesting to see if this is actually predictive of what gets released going forward.
Top

Five of those (including all four new titles) feature celestial encounters with humans, is there a theme going on next month?
Top

WAC is packaging some of their older horror releases (Body Snatchers, Innocent Blood, Wolfen, and The Hunger) together 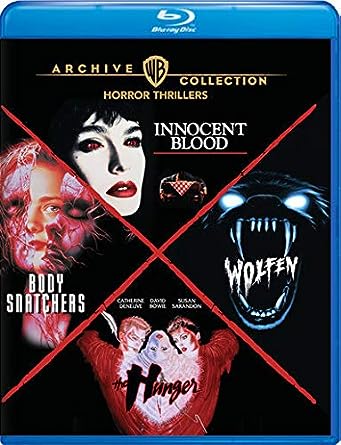 dwk wrote: ↑
Tue Jun 23, 2020 5:48 pm
WAC is packaging some of their older horror releases (Body Snatchers, Innocent Blood, Wolfen, and The Hunger) together

I can understand the convenience and lower pricing in bundling movies like this together (provided you like all four), but releases like this would drive my collector's OCD up the wall.
Top

It used to bother me more, but now I just think of the shelf space saved by bundles like that.
Top

I've gotten movies in themed triple packs (three Tim Burton movies, both Gremlins movies paired with The Goonies, for whatever reason), but inevitably I've gone back to the individual releases just to have movies by a certain director slotted into their section of my collection, in correct chronological release. That Burton one had Beetlejuice, Charlie & The Chocolate Factory and Corpse Bride, but since the former was released in 1988, and the latter two in 2005, it drove me up the wall considering all of the Burton movies released in-between.

It's a sickness.
Top

Latest WAC podcast revealed that a legal issue is holding up any new video release of Angels with Dirty Faces (1938).

In good news, they still have plans to release The Crowd (1928), but they won't say more at this time.

I haven't seen In The Good Old Summertime yet, but thrilled for those first two musicals!
Top

It wouldn’t be my priority, but the others are good news.
Top

Captveg wrote:Latest WAC podcast revealed that a legal issue is holding up any new video release of Angels with Dirty Faces (1938).

Hhhmm. What could that be?
Top

One would assume In the Good Old Summertime would come at the same time as The Shop Around the Corner, right? Or is there any reason to think Criterion might have gotten that one?
Top

Thrilled to hear that something, anything, is happening with The Crowd, one of my all-time favorites, not to mention The Pirate, which I discovered via this forum.
Top

Captveg wrote:Latest WAC podcast revealed that a legal issue is holding up any new video release of Angels with Dirty Faces (1938).

Hhhmm. What could that be?

My guess is something involving Roland Brown’s estate.
Top

Haven't they "still had plans to release The Crowd" for like 10+ years, or am I just thinking of every other WB silent classic?
Top

Maybe there's hope that we'll eventually see Greed, too. Do they still have the rights to that?
Top

They do. They mentioned in the 6/16 podcast at 44:35 that Greed was still being worked out. Specifically, the reconstruction from 1999 was done in standard definition. Feltenstein states he believes "there will be something new to talk about in regard to this motion picture in the future. It's not that we're neglecting it. We just want to approach it in the best way possible."

I find it interesting that The Wind (1928) never gets asked about on these podcasts, which is the other big WB owned MGM silent that has yet to even get a DVD release in the US.

This was also the same podcast where they revealed they have plans for a full restoration of Guns for San Sebastian (1968), but they haven't started yet and it's unlikely to be out this year. Another mention in this podcast is that there are no current plans to release Seven Sinners (1925). They've scanned a surviving nitrate print for preservation, but it does not have credits on it, and if they ever release it they would need to commission a new music score. 7 Faces of Dr. Lao (1964) is something they want to do in the future, but not on their current schedule. The Fixer (1968) has clearance issues that have been a problem for ~30 years.
Last edited by captveg on Fri Jul 03, 2020 5:47 pm, edited 1 time in total.
Top

It's a shame they haven't released The Wind yet. It looks fine on the Criterion Channel, just put it on DVD.
Top

The Pirate is straight up one of the greatest films of all time.

Maybe that explains why it wasn't in the Ultimate Gangsters Collection: Classics set. Was very surprised they included The Petrified Forest but not it.
Top
Post Reply
1220 posts

Return to “DVD and Blu-ray News and Discussions”